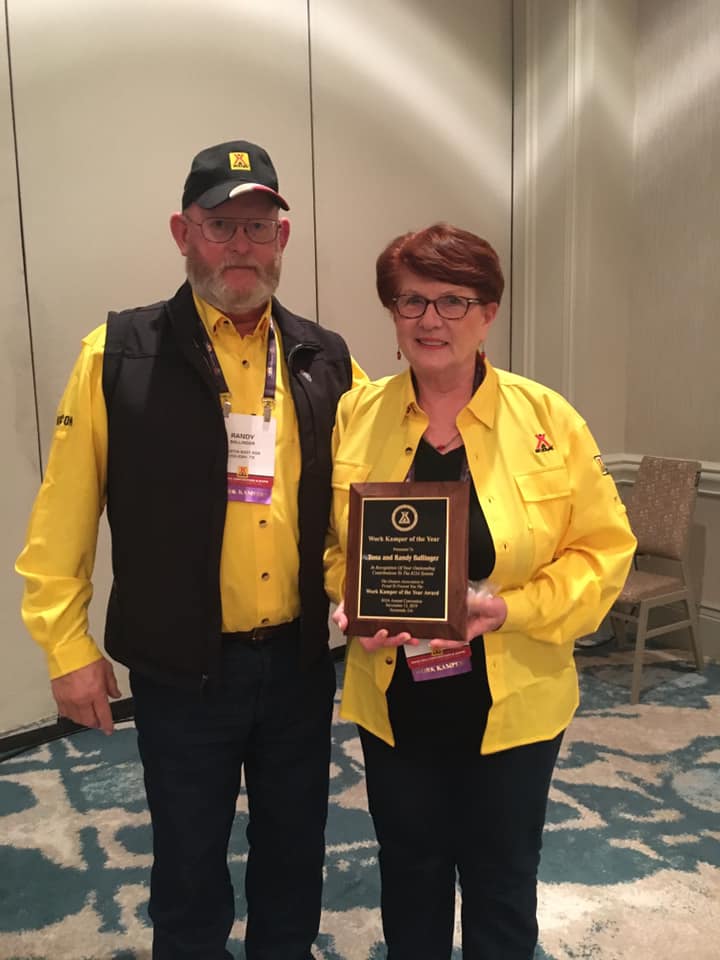 Tona and Randy Ballinger have been KOA Work Kampers since 2012, working all over the country.  Because of their hard work and dedication, John T. Baker, owner of the new Austin East KOA Holiday, TX, decided to nominate them for the KOA Owner's Association Work Kamper of the Year award.

Baker states, "Tona & Randy Ballinger had heard about the Austin East KOA new construction project and sought me out at the Austin RV Expo KOA Booth to discuss Work Kamper opportunities.  They showed up with resume in hand.  The next week they met with me at the construction site and I hired them on the spot.  They were the first staff I hired.  Immediately following, they started reaching out to other KOA Work Kampers they knew through the system and put us in contact with one another.  With the exception of one team member, Tona & Randy Ballinger were directly responsible for the introduction of and my hiring of all of our first season Work Kampers.  Since Day One, literally, they have been indespensible members of my Team.  They are currently the Front Desk & Outdoor Guest Services managers, respectively.  For most small business start-ups, the first year(s) are especially difficult; however, their presence and experience have made the first 18+ months of Austin East KOA exceptionally successful.  Furthermore, their leadership, counsel, guidance, and work ethic have significantly reduced the ownership/management burdens on me - something I am forever grateful of.  Simply put, Austin East KOA would not be what and where it is without this Team.  In large part due to this Work Kamper Team, Austin East KOA has ranked 9th Place in KOA NPS Overall in our first year, won the Founder's Award in our first year (and we are on track to win Founder's Award again this year), and has been awarded two consecutive perfect Quality Assurance scores (2018 & 2019).

The Ballingers are currently working as managers for the campground, and were chosen by Baker to attend KOA University in January 2020 to increase their knowledge of the brand.