Robert and Elisa Prato, owners of the Delaware Water Gap/Pocono Mountain KOA Holiday, have many things to be proud of.

Near the top of that list is the 2018 Campground of the Year award from KOA. With 515 campgrounds in the KOA system, that’s no small feat. But this year marks another milestone and achievement to be proud of, 40 years as a KOA. 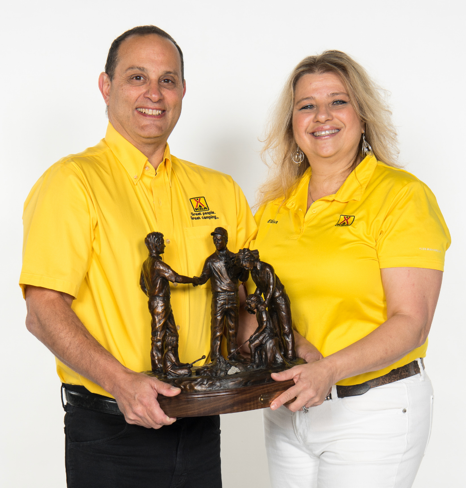 Robert’s dad, Carmen Prato, bought the KOA from its original owners in May of 1979. The campground was the first KOA in Pennsylvania in 1969, yet another feather in the campground’s cap.

“My father was a truck driver. We started camping in 1970 and after nine years of camping he decided to buy a campground in 1979,” says Robert Prato.

Robert was 19 at the time his father bought the campground, and had worked for a construction company in New Jersey, where he was born and raised, before leaving to help run the campground for five years.

After that he tried a few other ventures before deciding the campground was his future. In 2006, 27 years after his dad purchased the campground, Robert bought it from him. While his siblings used to help out, they both have other full-time jobs leaving the campground business to Robert and his wife, Elisa.

Shaping Robert’s life in more ways than one, the campground is where he met Elisa.

The couple has three sons, the youngest of which, Louis, plans to take over running the campground someday.

“I’ll make decisions or suggest something and my son will say, ‘Don’t mess with my campground.’ I go, ‘Your campground, eh?’” Robert says with a laugh.

Before Louis worked at the campground he worked at a dairy farm where Robert jokes Louis had his first grandchild: Carmen the cow.

“Carmen the cow was named for my father and was born on my birthday,” Robert says. “The cow is the major attraction at the campground. He has a corral and a leash we take him out on to walk around. He’s our campground pet.”

The Prato family says their goal is to continue improving the park each year while maintaining its family-oriented atmosphere.

“It’s all about having a good time with your kids and family,” Robert says.